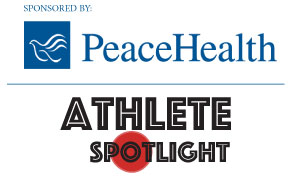 At 10 years old, Madison “Maddy” Wick did her first Triathlon. Now at age 13, Maddy trains with Strive (a Youth and Junior Triathlon team), the Columbia River Swim Team, and Whisper Running Club. She is a regular fixture on WHY Racing Event’s Triathlon course and has inspired many people, including her own family, to try the sport she’s passionate about.

You will find Maddy, along with her mother Misty and younger brother Austin (age 10), on the course at the upcoming AppleTree Sunset Run.

You completed your first Triathlon three years ago when you were just 10 years old. What inspired you to try one?
Maddy: I was heading home in the car from a swim meet. I didn’t know what a Triathlon was, but I thought it would be fun, so out of the blue I asked my mom if I could do a Triathlon. She did some research and found the Wahine all-women Triathlon. I did it and I loved it, so I just decided to do some more.

What was it about the event that made you feel like you had to do it again?
It’s different than any other sport because it’s three amazing races all in one. You get to do a swim race, then a bike race, and then you get to do a run race. One after the other. Also, the competition is different. People are much nicer to each other. I’m out there with kids my age and adults, and we all do it together. Everyone is really supportive.

You recently competed in the USA Triathlon Youth and Junior National Championships. How was that experience?
It was in West Chester, Ohio in August and it was draft legal [Draft Legal racing is a style of Triathlon racing that allows athletes to draft off of one another on the bike leg of a Triathlon]. I was pretty happy with my race because last year I finished 66th, which I wasn’t very proud of, and this year I got 33rd. I was pretty happy with that because my goal was top 30. It was really fun, too.

Did you find the same positivity that you’ve experienced with other Triathlon races? I imagine it’s a pretty competitive environment.
It’s really competitive, but before the race all the kids were talking about how nervous they were which I was not expecting at all. Everyone was super nice to each other.

You’re heading into 8th grade. You are training for both swimming and Triathlons. How do you find time to train?
I’m part of the Triathlon team Strive coached by James Bauman. All the kids have school, so he just finds times that work for everybody then he will put a practice together. He schedules different days during the week so if I can’t come to one practice then I just go to another.

How much time do you think you spend every day training?
I probably do about 2-3 hours a day.

What’s been your favorite Triathlon event?
It would probably be the Blue Lake Triathlon. I do that every year. I just really love the course. The swim is great because usually the swim race is in rivers and the water is pretty cold, but Blue Lake is usually warm. The bike course is mostly flat, but it has one little hill which is nice for variety. The run is completely flat, and you also get to run in a little trail which I like for the variety. And it’s kind of the same people every year. It’s also the race that encourages newcomers. I like that.

You’re clearly a driven young lady, but what keeps you motivated?
Whenever I train with Strive it’s super hard, but when I go to practices there are lots of people there, so I have lots of teammates cheering for me. The workouts we do are competitive, but everyone is cheering each other on. It’s not that hard to stay motivated because everyone is so nice.

Misty [Maddy’s mom], what has it been like for you to watch Maddy on this journey?
Misty: I have been shocked by her drive to want to do all of it. She’s actually inspired our whole family to get healthier. I’m doing my first triathlon next month, which I would never be doing if it wasn’t for her. She’s inspired her little brother to get into it. She’s kind of been the glue in our family that’s got us all on a healthy track, starting to work out and run. We all got road bikes and we go ride now. It’s been amazing for us as a family. I’m so happy I signed her up for that first one.

What is your Why, Maddy?
Because I love it.

“Because I love it.”