In 2013 I was taking a walk around the block thinking about the last year and a half of my life, after a number of indescribable events that took place. At 35 years of age, my young family was faced with crossing a “mountain range” of health crisis from our grandparents who were quickly beginning to fade, to my parents both diagnosed with life altering conditions (Parkinsons and a stroke) and the loss of an aunt and uncle from cancer and my wife’s father from a heart attack, all within 3 years. In the midst of it all, my nephew passed away from a 7 year battle with cystic fibrosis.

After feeling like we were lost on the Pacific crest trail with wildfires burning out of control all around us, the eruption of Mt. Hood would have been better than the news we received when our 2 year old son was diagnosed with cancer and our lives would be leveled to a new low.

As we entered what felt like a new dimension, where our son would be treated with other children who walked the halls of the oncology unit with little bald heads, we would also discover through the rise of social media, a world of hurting people who had little to no hope for their children’s future. After about a year of treatment, our son’s health was moving in the right direction.

I began a “Run for the White House” initiative to bring more awareness to the world about childhood cancer. I had never been a distance runner before this time, and I signed up for my first 5k call the Luckython. I trained to run about a 24 minute 5k, but it turned out the race was not so lucky when I rolled my ankle after the first mile. I finished in 27 minutes with a smile on my face and decided I would look for my next opportunity to race again healthy.

I worked my way into a 10k and as I began to feel the “runners high”, I decided to work toward doing a half marathon. I ran my first half alone from Salem to Silverton in the summer of 2014 and ran my first official Portland Half Marathon in under 2 hours.

During this time, I had been following kids on Facebook who had been diagnosed with different types of cancer. Local friends and others began to hear about how we were donating our miles in our virtual cross country event, on our way to the White House. I realized I needed to finish my virtual dream of running across the country, by flying out to Washington D.C. to run for the White House! It was there that I met many other families for the first time, who had been running in my virtual event, who also had kids with cancer, some who would not survive another year. I didn’t make the cross country trip just for a good run in downtown D.C. (as awesome as it was) but to keep reminding others that our kids were the light and inspiration to keep us running until we could see great change taking place to help fund kids still hanging on for dear life.

We have run over 4 million miles together and raised our activity to a new level “Inspired By Kids”. I ran many more half marathons and finished my first marathon in Bend! 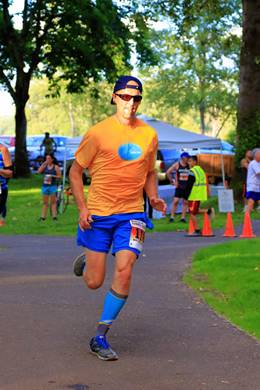