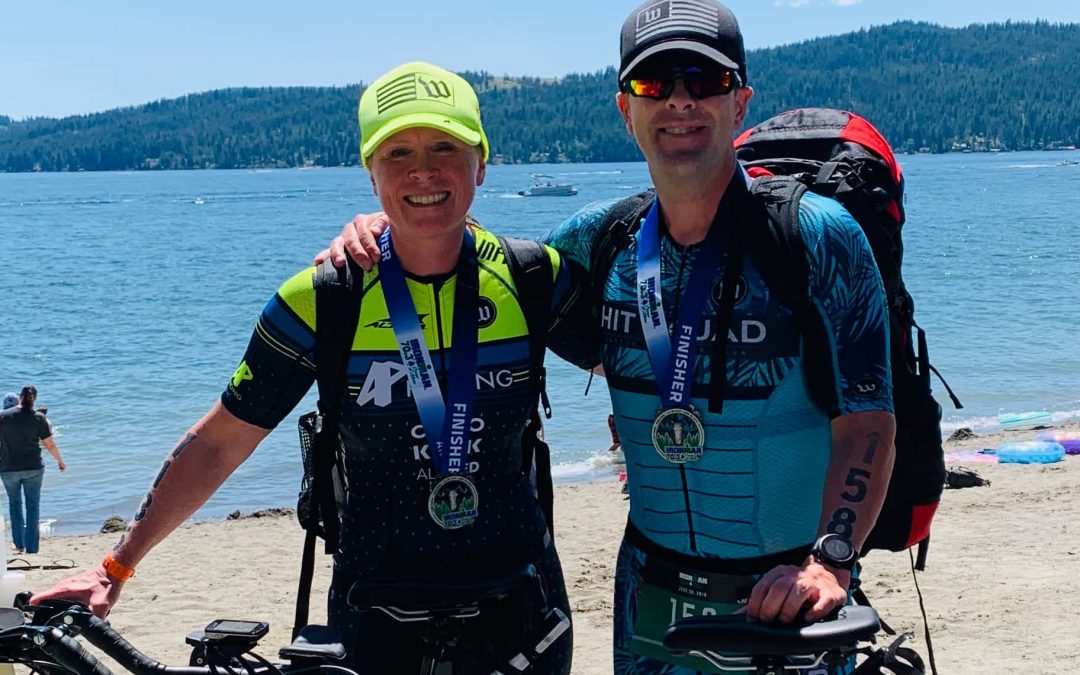 Scott Goodrich is a proud member of the Wattie Ink. Hitsquad Triathlon Team, Dialed Triathlon Team and the Chris Bagg Coaching Group.  He leads a high performing team at the Port of Vancouver as the Director of Finance & Accounting.  Scott graduated from Linfield College in 1997 with a Bachelor’s degree in accounting, ran cross county and played soccer on their collegiate teams. In his free time, he enjoys spending time with his family, triathlon racing, bike racing, running, duathlons, and swimming. A Northwest native, he is originally from Tigard, Ore. and currently lives in Camas, Wash. with his amazing partner Jenn, two Rockstar daughters, Lauren and Elizabeth, and two dogs Cooper and Lucy.

What’s your WHY? WHY do you race?  I race to stay healthy, thrive on speed/competition/positivity and be a good example for my daughters.  that’s my why…here’s my story.

I was very lucky to grow up in an active home…both of my parents loved the outdoors, skiing and my dad was a nationally ranked marathoner…endurance was norm in our family, and we thrived with active vacations!  Soccer was my sport of choice growing up and carried me through most of high school until I decided to dabble a bit with cross country.  In high school I was running cross country, playing soccer, on the ski team and running track in the spring…this was our family lifestyle.  When I got to college, discontinuing my athletic adventures never entered my mind and I walked onto the cross-country team and had a very challenging year of getting faster.  After a year of that…I was challenged by not being quite fast enough for collegiate level cross country; I was really missing soccer and decided that next fall I would walk onto the soccer team.  Playing soccer was incredibly fun, we had great coaches and the team was very driven.

After graduating from Linfield, I entered the world of accounting, audits and taxes, 90-hour work weeks…and no exercise.  In a matter of 2 years I went from 180lbs to 230lbs and found myself on high blood pressure medicine and meeting with professional dietitians by the age of 24.

Needing to make a change and with encouragement and tough love from my parents, I joined the 24-Hour Fitness down the street and fell in love with Spinning and Body Pump classes.  After about a year of hard work I was down to about 183lbs and was getting invited to Saturday outdoor cycling group rides and developed a love of riding my bike.

The next thing I knew I had joined a local bike racing team and off I went, racing every Tuesday night at PIR and taking part in road and criterium races on the weekends.

My late 20s arrived and first came marriage, then we had our first child…work ramped up again, exercise stopped, eating did not stop…and I found myself at 267lbs at the age of 29…back on high blood pressure medicine and too embarrassed to go to my 10-year high school reunion.

After a very tough love conversation from my parents…round two of taking care of myself was about to begin.  Back to the gym, spinning class, body pump, personal trainer, dietitian…morning and night…I was making a permanent change in my life, ultimately to save my life and be able to be an active parent to my girls as my parents were for me.

I did it…267lbs to 178lbs.  I was back to biking and cyclocross racing, getting faster…winning my first bike race and getting upgraded to a Cat.3 and having a blast.

My early 30s were great, healthy and living life to the fullest, celebrating the joy of another beautiful daughter.

Here comes 39 and a big life changing event…divorce hit my family and I found myself to be the primary single parent of these two beautiful ladies and needed a fresh start in life.  I learned through this process that life is short, and you never know when it will change in the blink of an eye.

Tough love conversation number three from the parents…time to surround yourself with positive people…be the best Dad…Always!

About to turn 40 and making new friends, I found myself at the Ironman 70.3 Victoria watching all these incredibly positive people race this event…and I was hooked.  It was such an amazing day of watching people push themselves to the limit through this very structured and planned process…it matched well with my accounting brain and I vowed that I would be back to compete at this race!

Still biking and cyclocross racing…I needed a bit of a change and I had heard that one of the guys (Chris Bagg) on my road cycling team was a professional triathlete and coach , so I randomly shot him a note asking if he would be interested in coaching me to my first triathlon with a goal of doing Victoria the next year.  He happened to have one spot left on his Chris Bagg Coaching Group roster and I took it!

Next spring, I found myself on the starting line of the Oregon Dunes Triathlon Olympic distance race.  My parents where there…my new partner, Jenn, was there…and I went for it!  I think Jenn spent most of 47 minutes it took me to swim 1500 meters assuring my parents that I would be okay…and to my parents relief I made it out of the water…off onto the bike, then the run and managed to get 3rd place in my age group for my very first triathlon!  I loved every moment of that race!

From there I went onto complete my goal I had set the previous year and came across the finish line at Ironman Victoria 70.3 and then onto Ironman Canada 70.3 later that year.  As soon as I got home from Canada, I signed up for Ironman Canada the next year…which would be my first full Ironman.

Then it happened again…another massive life changing moment. It is a given that during a cyclocross race you will probably crash hard at least once.  This one involved a random guy running into me from behind causing my neck to pop backwards.  Back on the bike and off I went…great race and finished in the top five of my group.  Little did I know that during that accident I had suffered a Vertebral Arterial Dissection. A small slit inside the endothelial lining of the blood vessel, that allows blood to pool between the lining and the artery wall, eventually creating a clot. Less than 1% of all strokes occur from this condition.  My clot released during a track workout at the local middle school and landed at the base of my cerebellum.  This caused me to lose all sense of balance, never losing consciousness I was able call for help.  I couldn’t believe it when I had learned that I had a stroke and that I would be recovering in an ICU then stroke recovery unit.  I lost it when I learned how close I had come to losing my life that day.

After months of recovery, with incredible support from Jenn, family and coach, and very blessed to be 100% back, I continued with my goal and crossed that finish line late that summer, tears flowing hearing those words…” You Are An IRONMAN!”.

Since that time, I have gone on to cross many other finish lines…two more Ironman’s with a goal of one day qualifying for the World Championships in Kona.  Jenn, my girls, my parents and family and I work together constantly to live life to the fullest, motivate and support one another to reach our goals.  You never know what tomorrow will bring…make the best of today!

That is my reason Why! 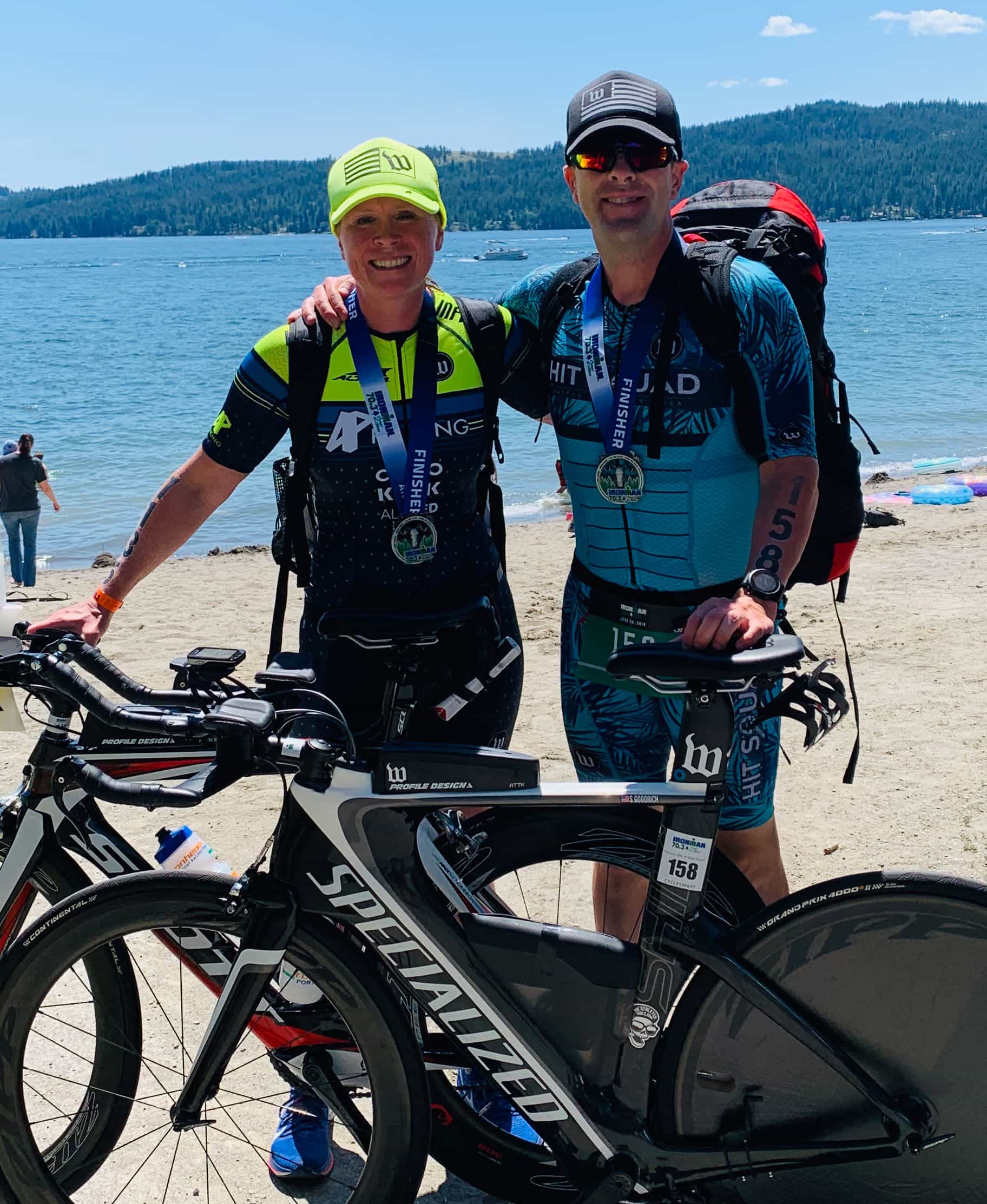