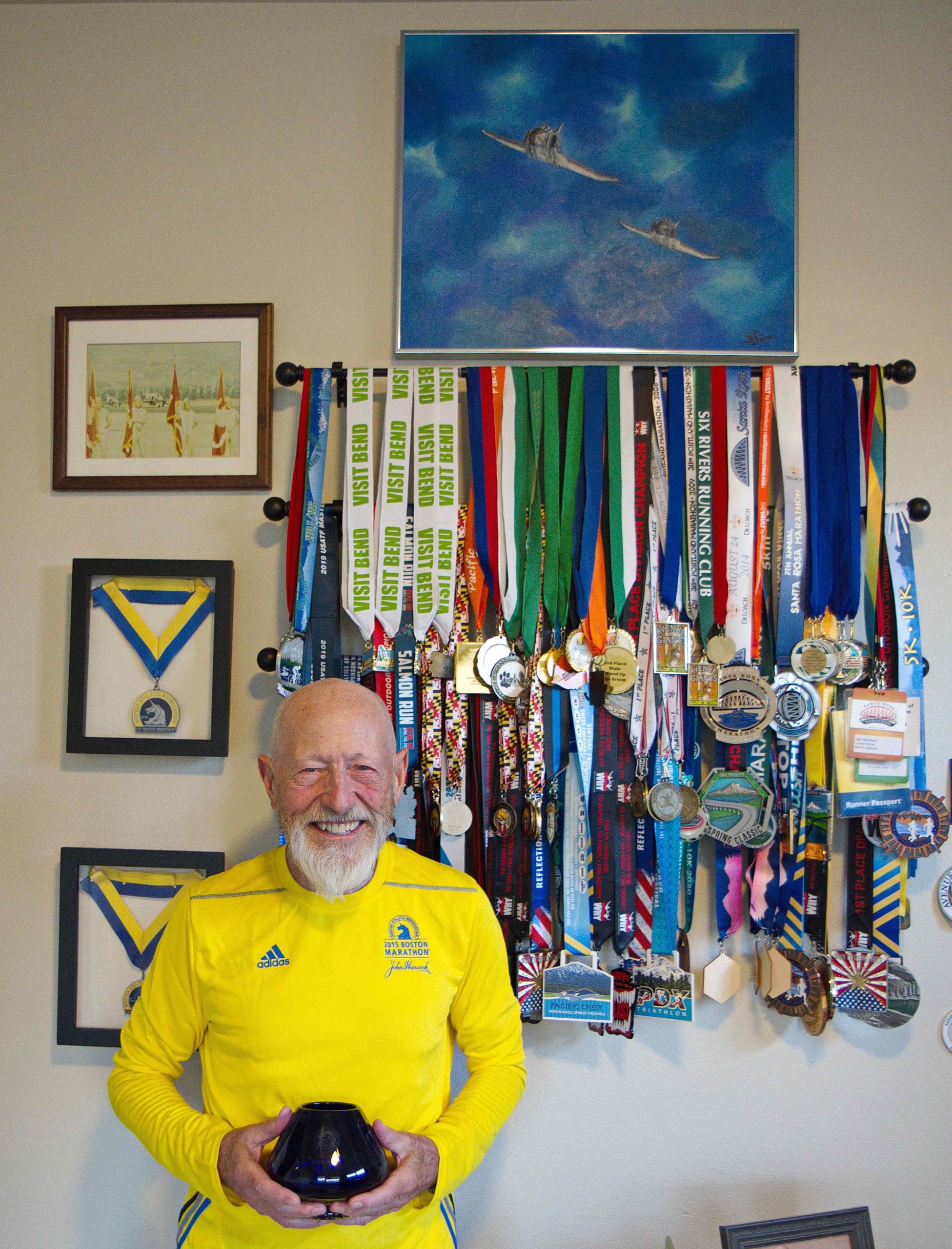 “I have had the extremely good fortune to be able to live 5 life histories.  And as I have lived these 5 histories, I have been governed by several guiding principles that have stood me in good stead, one of them being – “Be the best you can be.”

Born in Billings, MT in 1933, I grew up and was educated in Portland, Oregon, graduated with a BS in Chemistry from Oregon State in 1955 and commissioned a 2nd Lt USMC.  My spare time was taken up with music and there was little if any recreational running during my growing up period.

After completing Marine Corps Basic School, I was accepted for flight training at Pensacola, FL.  Upon completion of advanced jet training at Kingsville, TX, I embarked on a 25-year career as a Naval Aviator.  Along the way I flew a multitude of Aircraft, mostly jets, received a Master’s in Aeronautics and have had many assignments including 2 tours in Vietnam.  I had been required to maintain a certain level of physical condition in order to be a Marine, but never had been a runner (As an aviator – who runs?).  As a part of attending the Marine Corps Command and Staff School in Quantico, VA, we were required to run at least 10 miles a week.  This was the beginning of a running program for me.  While at Command and Staff College, I received honors for a paper that I wrote on an advanced theoretical helicopter design, later graduated with honors from the Industrial College of the Armed Forces in Washington, DC in 1977 and was assigned to the Pentagon.

While there, I had a casual conversation with a friend one day who proudly told me that he had run the Marine Corps Marathon the year before. Driven by another of my guiding principles, “You don’t know what you can do until you try it,” I said to myself, “If he can do it, so can I.”  So, I signed up to run the Marine Corps Marathon in 1980 while not having any idea of how to train or what it took, having no good running shoes, where there were none of today’s course amenities and no GPS.  But I decided that if I could run for 4 hours, I could finish.  Five months later, I met my goal and ran the 4th Marine Corps Marathon in 3:57 along with what was then only 8,000 runners.

Retiring from the Marine Corps as a Colonel in 1980, I joined Lockheed Missiles and Space Co. in Sunnyvale, CA and was instrumental in building classified space satellites and the Hubble Space Telescope.  I tried many times, but never was able to “Beat the Boss” in the annual company-wide run to beat the then President of the company in a 5K run.

After 10 years, I took early retirement, moved to Sunriver, OR and became a Real Estate Broker for another 10 years.  It was here that I discovered the paved paths in Sunriver and did a modicum amount of running and ran in the annual Sunriver to Inn of the Seventh Mountain run several times.

My 5th life history came quite by accident.  It was February 2008 when my youngest son had a heart attack. Fortunately, it was mild and he recovered quickly.  As a part of his chosen rehab, with permission from his cardiologist and restrictions on heart rate, he and his wife decided to train for the Portland Marathon with a local running group (USA Fit Bend).  I had always wondered if I could run another Marathon, but never had the time commitment available for the necessary training effort.  Being retired, I decided at 78 that it was time (“You don’t know what you can do until you try it.”).  Subsequently, my oldest son, his wife and my youngest daughter decided to join us.  So, 6 of us in the family ran the 2008 Portland Marathon.  My time was a little over 5 hours.

I had no idea at the time, but my coach suggested that I look up the Boston qualifying time for my age group. As it turned out, I was about 20 minutes short.  So, I had a new challenge.  Five of us in the family ran the 2009 Portland Marathon and I qualified for Boston.  Since then I have run 6 marathons including 2 Boston Marathons, the first one (2011) in which I took third in my age group.  I ran my second Boston with my oldest son.  To be able to run my 2015 Boston Marathon with my oldest son was one of the many high lights of my life.

I loved the scenery and freedom during the long distance runs in and around Sunriver and the hill challenge of nearby Lava Butte where I had done my earlier training.  But unfortunately, 2016 brought a major challenge in the form of a compression disc fracture in my back.  At one time it was so bad that I could barely get out of bed.  But another one of my principles stood me in good stead – “Never give up.”   With a great deal of physical therapy, I was able to get back on my feet.  During the last appointment with my neurologist, I asked him what I could do.  His response was, “Do whatever you want and stop when it hurts” – a lot of help that was?  So, I did start out with a lot of short run/walks.  I decided not to return to marathon running, but to try a new venue – track and road running.

Unfortunately, the pandemic has torpedoed everyone’s plans for 2020.  I had plans to run the Indoor and outdoor USATF National Masters, the World Masters in Toronto and attempt to qualify for the 2021 National Senior Games along with running some track meets and some 5/10K’s.  But it wasn’t to be.  I couldn’t find one meet that wasn’t canceled.

Fortunately, I discovered Why Racing Events early this year.  To be honest, I was initially not very enthused about virtual racing.  As we all know, there’s a world of difference between competing head to head and racing virtually.  But there is a trade-off – rather than being limited to only one event, it’s possible to compete in multiple events and do so without traveling out of the area.  Mailed race packets and Zoom Award Ceremonies are the frosting on the cake that make virtual racing as good a substitute for the actual event as can be had.  So, thanks to some very creative people, we are indeed able to make lemonade out of lemons.

Over my last 12 years of serious running, I have met many runners of all ages.  As a community, there is no finer a group.  I have made many friends who are like minded and by competing there is always the next goal which in my case is the next age group.  Again, “Be all that you can be.” “You don’t know what you can do until you try it.” and “Never give up.” And one that I recently have appropriately added – “Showing up is winning.” 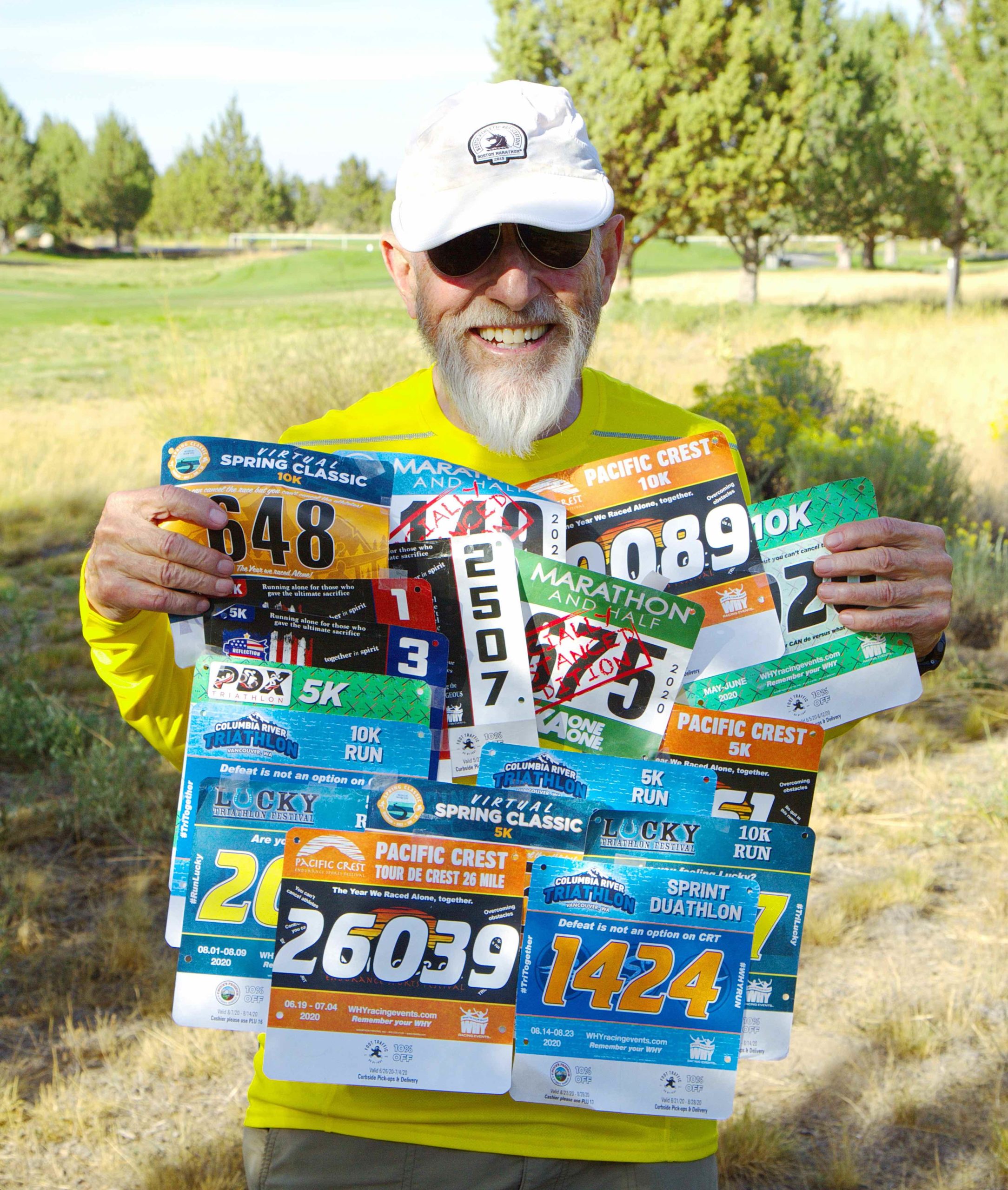