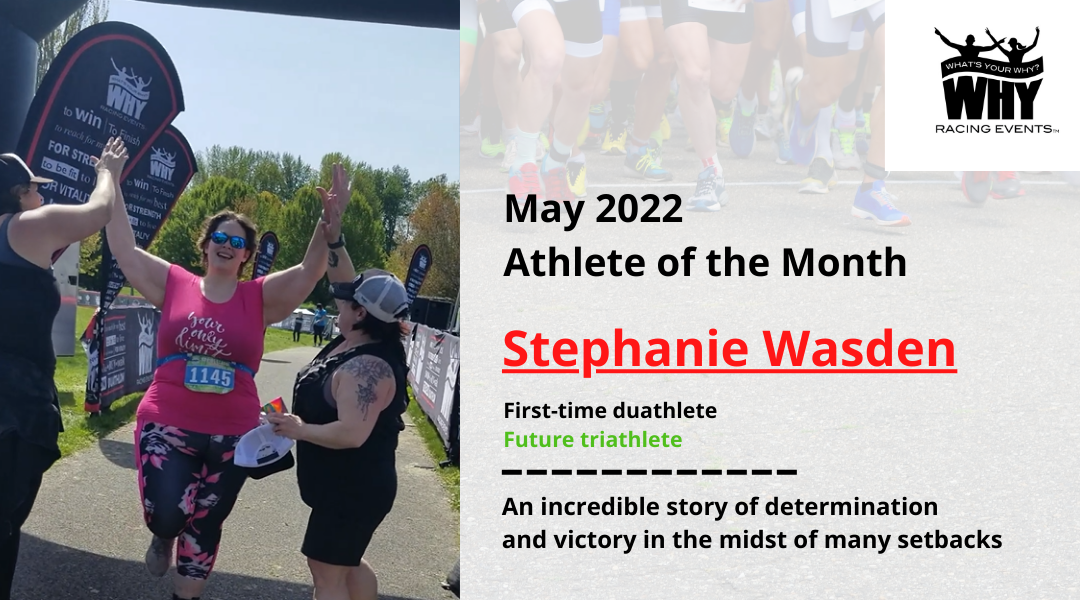 We caught up with our athlete of the month, the newly minted duathlete Stephanie Wasden at Spring Classic. Stephanie was the last finisher that day – she knew she would be last, but it didn’t bother her. She was there to finish and finish she did.

Stephanie’s incredible journey started over a decade ago and covers some remarkable injuries and setbacks that could have easily caused her to quit. But she didn’t.

Eleven years ago, I heard of a group of women who were older or out of shape and decided to do a sprint triathlon together. I thought, I want to do that.

I set that as a goal and started training with friends but couldn’t do it due to health issues that year.

As I got healthier, I started training.

Then I sustained a back injury, got sciatic nerve damage and lingering pain.

After I recovered from that, I started training again. At the beginning of January 2019, another significant setback came calling.

I fell down a flight of stairs, tore all the ligaments in my right foot and dislocated my first three metatarsals. Had to have reconstructive surgery at the end of January. I was on a knee scooter much of the year and couldn’t put weight on my foot. Gained a bunch of weight as a result.

Before that happened, I had committed to training for a 5k.

I got the metal out of my foot in July and resumed training, ultimately completing the 5k in September of 2019. But I was so out of shape, that I knew I wasn’t ready to tackle a sprint tri just yet.

The challenges keep mounting for this future athlete of the month …

In 2020, I tried to go on walks and stay active but struggled.

Last February (2021), I started the process to have gastric bypass surgery. I was 435 pounds. I could barely walk or do anything. I wasn’t enjoying life.

I attempted to move more and walk around. In May of 2021, I tried to walk around the block in our neighborhood – ½ mile, took me 30 minutes. I was exhausted and out of breath.

Significant victory, followed by more challenges and a lofty goal

In July of 2021, I had my gastric bypass surgery. As I was in the hospital recovering, I declared that a year from now, I am going to do a sprint triathlon! People looked at me like I was crazy. (I was 100 pounds heavier than I am now.)

It would have been a much smoother path from that point, but another challenge presented itself:

We got into a terrible car wreck in October: t-boned and spun into a semi at 60 mph!

We walked out of the hospital, and I knew we were lucky. However, I came to find out that I had a major concussion. The next thing I knew, I had lost my ability to speak!

That got better, but there have been several times since then when I’ve lost my ability to speak.

Since November, I’ve done a lot of therapy types: speech, physical, and occupational. I resumed training with the help of my physical therapist who has done 3 half Ironmans and taught me how to train for my triathlon with a concussion.

With my goal in front of me and the help I was getting, I continue working towards my goal of a sprint triathlon. Signing up for the Spring Classic Duathlon was my next training event.

Two weeks before the race, I went online to look at distances and discovered there were two 5ks to the duathlon – I thought it was just a bike ride and a 5k. Let’s just say, there were choice words uttered.

I told myself, “It’s OK. I can do the impossible. I’ll figure it out and do it.”

Long story short, Stephanie says of the challenge she conquered: “I just kept going, and I did it!”

When asked how she felt after achieving this monumental milestone, Stephanie says,
“I feel like I can take on the world!”

What’s next for Stephanie?
“My first sprint triathlon will be Hagg Lake in July. Then I’m doing Girlfriends Triathlon in August. My ultimate goal is to do a half ironman.”

Stephanie’s advice for the budding athlete:
Start small.
If you are going to physical therapy, go. Get help. Ask for help when you need it.

Set a goal and start. Even if it takes 11 years, you stick with it. Don’t give up.
Make yourself a promise. That’s what a goal is. Stick with it, don’t break it.
***
What an amazing journey, Stephanie! We are so proud of you and your determination and resilience. We can’t wait to see you at Hagg Lake!

Inspired by Stephanie’s journey? Check out our upcoming list of events and pick one to challenge yourself and your family or friends!