Did we mention Olympian, World Champion triathlete and Coach?

In her first athletic incarnation, Juliet played field hockey and basketball and rowed in high school. Despite dreams of playing in the then newly minted WNBA, Juliet’s slow first step and poor court sense made rowing the better choice. Juliet was the first freshman to ever make the varsity boat at Harvard and the youngest member of the 1988 U.S. Olympic Team as a college junior. Juliet was captain and won Harvard’s award for the university’s top female athlete; she was inducted into the Harvard Hall of Fame five years later. The best part of her rowing career, however, was coming back to row her senior year at Harvard.

“It was just awesome. Such a tremendous group of women. I learned so much about leadership and building confidence and mentoring and how to make an entire squad fast. We worked hard but I just remember laughing all the time. And we won everything.”

Juliet also had her first lesson in what it means to be part of an all-women’s community in Harvard’s Weld Boathouse. “It was – and is – the only women’s-only collegiate boathouse in the country. It’s a place where women from all backgrounds and baggages are judged only by how hard they work to make boats go fast and what they do to lift up the team. It’s an unconditionally supportive community. That made a huge impression on me.”

After college Juliet started a nonprofit that recruited college athletes to coach in South Africa’s black townships; ran teaching programs across southern Africa; went to Stanford business school; married; worked with refugees on the North Korean-Chinese border; raised two sons and two dogs; enjoyed stints at Nike, Mercy Corps and Friends of the Children; moved her family 5 times across 24 times zones to support her husband’s career; served on school and non-profit boards; coached four different youth sports; learned Dutch; started a blog, a travel service and a consulting practice; built a career as a project manager at Zoom and Infinity Images; and announced the Opening Ceremonies for the 2014 World Rowing Championships in Amsterdam.

In 2014, Juliet returned to competitive sports, first as a tennis player and then as a triathlete. She quickly remembered how much she loved racing and competing, both as an athlete and as a mentor and coach. In 2017, Juliet started the BATWomen, a high performance women’s triathlon team, in Portland. Excited to take it one step further, Juliet received her USAT Coaching Certification and started coaching in early 2018. While continuing to compete at the national and international level, she coaches with Chris Bagg Coaching in Portland and works with athletes locally and all over the country.

What’s her WHY? “I love coaching, I love training and I love racing. And I love the community of people who do this crazy sport. I’m a rower at heart; I want to train with others! One of my favorite days of the year is our Solstice Training Day in Hood River when nearly 50 triathletes jump in to train from dawn to dusk. My favorite race is Hagg Lake – the WHY team puts on incredible, inclusive events in beautiful places; Hagg Lake is a race I’ll put on the calendar every year, both as a coach and an athlete, particularly as I can cheer on my athletes and then utilize it as a longer training day with added biking or swimming after the race festivities are over.”

“2019 was a really challenging year for me. I had cancer, was laid off, supported extended family members through mental illness, lost all my jewelry in a house burglary, injured my Achilles, put our multi-generational family home on the market, supported my husband through a job change, and struggled with menopause. But the consistent factor that buoyed me throughout was our vibrant community of triathletes, training, and feeling inspired by the athletes I coach. One of the highlights of 2019 was watching three of my athletes complete their very first 70.3 – I’ve never been so proud. I feel really lucky to have discovered this sport in my second incarnation as an athlete and to make a career out of what I love best – helping other people achieve their goals in this sport.” 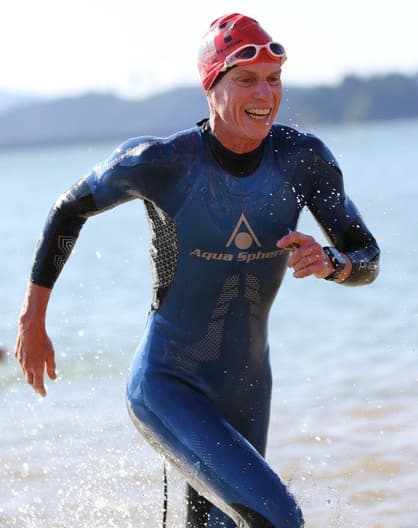