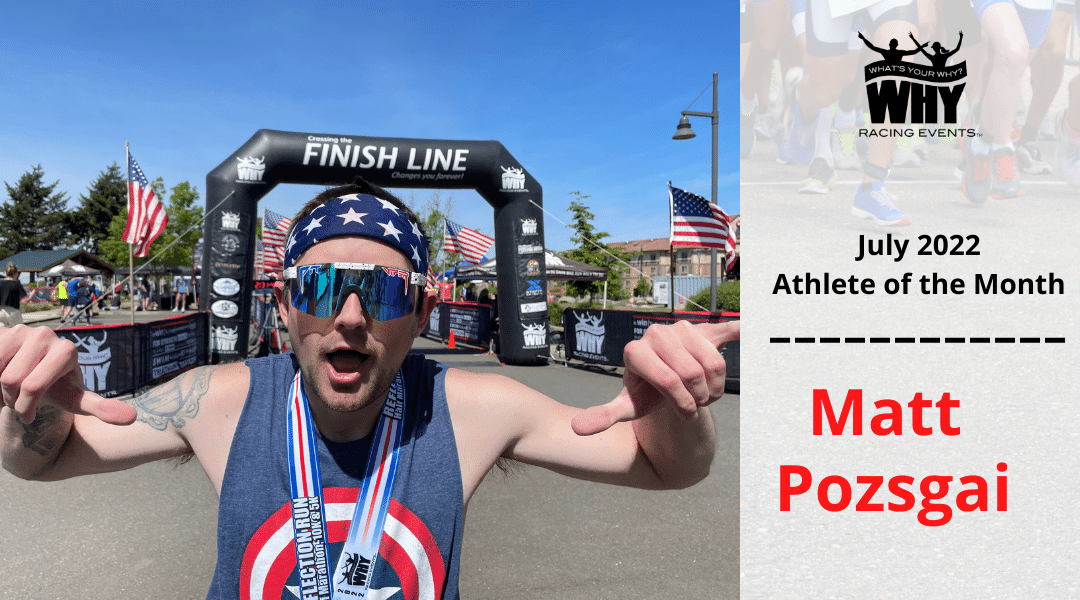 July’s Athlete of the Month is 27-year-old Matt Pozsgai from Vancouver, Washington. He’s been running for about a year and will be tackling his first of many triathlons this summer. But there is a lot more to his story. Be prepared to be inspired!

He shares the following:

“I was diagnosed with a genetic disease called Cystic Fibrosis at 4 months old. Cystic Fibrosis (CF) causes a build-up of thick mucus throughout the body, primarily in the lungs and digestive system, which causes malabsorption and chronic bacterial infections in the lungs.

The constant respiratory infections cause irreversible damage and scarring and the inability to absorb vital nutrients makes it very difficult to thrive. Because of this CF is a life-shortening disease with an average life expectancy of 42 years old!

The first 25 years of my life were a battle, I had been hospitalized around 40 times, each stay lasting between 2-3 weeks. I lost over 50% of my lung function and I was nearing the need for a lung transplant.

Fitness was always key in my fight to stay healthy, but I was very limited in what I could do. I always wished I could run or do a triathlon, but at the time it was impossible. I couldn’t run 100 meters without being winded.

Then in December of 2019, I started a new CF medication called Trikafta, which targets the defective gene that causes CF. To call it a miracle would be a vast understatement! My life has been completely changed.

The biggest blessing is my ability to pursue all of my dreams that seemed impossible before. The first of which is my lifelong dream of being a firefighter. I am now a volunteer firefighter with Camas Washougal Fire Department.

The biggest goal I’m pursuing right now is to be the first person with CF to run all 6 world marathon majors (Chicago, Boston, NYC, London, Berlin, and Tokyo).

The first of which I’ll be running this October in Chicago and I’ve also been accepted to run NYC in November of 2023, both of which will be charity bibs for the Cystic Fibrosis Foundation.

That’s just the beginning of a long list of goals that I’m planning to crush in the near future!

My “WHY” is to accomplish everything that once seemed impossible, and to push myself to limits that I thought I’d never reach.”

Excuse us while we wipe away a few tears of joy! What an incredible story, Matt!

Matt is relatively new to the Why family, having run his first event with us at Reflection Run in May. But he plans to be a regular and will be joining us for the Columbia River Triathlon in August.

Matt – we are so delighted to have met you and been inspired by what you’ve been through and all you’ve accomplished – and the bright future you have ahead of you. Thank you for sharing your story!  Keep chasing those dreams!