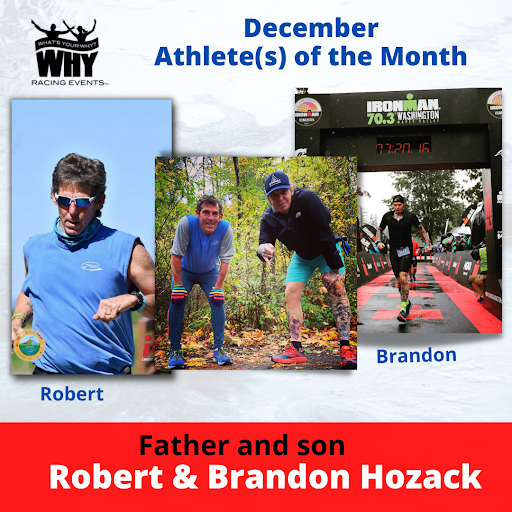 December’s athlete of the month is a dynamic father and son duo who have both overcome incredible challenges in their lives and continue on their journey of inspiring athleticism.

Make yourself comfortable as we proudly introduce you to:

I live with an auto-immune disease called Ankylosing Spondylitis, but I refer to it simply as AS. It is a rare form of arthritis and an advanced form of Axial Spondyloarthritis. Its primary objective is to fuse my vertebrae and ribs and render me immobile. It also causes incredible amounts of pain at any given time for any given reason due to the inflammation properties of the arthritis part of the disease. In other words, it’s a real bitch.

A little over six years ago, I was training for the Columbia River triathlon, and after a bike/run, I basically could not stand or walk. I went to Rebound…MRI…X-Ray…blood tests…arthritis panel of blood came back positive for an antigen called HLA-B27…and that is where my journey really began.

After the doctor explained to my wife and me what I had and what it wanted to do to me, my wife turned to me, and the first words she said to me were, “An object in motion tends to stay in motion.” I got up, left the doctor’s office, and said to myself, “I will handle this my way, on my terms; this will be my journey with AS and not anyone else’s…” And I got to work.

I do believe anything is possible with the correct perspective and mindset and in my case the right drugs. I am on treatment, and it does make the things I want to do easier. I wake up each day ready to battle, push myself into the unknown, and see how far someone with a disease like AS can go.

I want to inspire others that live with anything similar that it doesn’t mean your life is over, it just means it’s going to look different than you thought. It was barely sprints and 5k’s when I started down this path, and now I’m looking at full ironmans and 50ks. Anything is possible, right?

I was very angry and fearful after my diagnosis and needed a healthy place to direct that energy. I chose fitness, but as I learned the hard way, you can only persist so long relying almost entirely on anger for motivation. I eventually came to a place of acceptance with my disease, understanding that it is progressive and that it is “not impossible, but highly unlikely” (to quote my doctor) that it will ever go into remission. I have things I want to do in my life and I must adapt to a new way of life. I do the things I do because one day I may not be able to do them anymore. I also do them to satisfy a deep desire within myself to see what I am capable of in the face of such adversity, to see how far I can truly go.

I also have one other very strong reason. My son. AS is genetic and one day he could find himself just as I have. I have to be a positive and strong role model for him. I have to show him that you can still do incredible things even with a body that doesn’t work quite right. I hope that he will NEVER have to go down this road, but if he does, I will have already laid the groundwork for him. He’ll know, without question, that he can still accomplish anything he sets his mind to.

Also, I started my own Instagram page to document my journey and day-to-day living with AS. It is @do.as.is

Excuse us as we wipe tears away and introduce you to Brandon’s dad, Robert Hozack …

I’m 68 years old and started running at 32 when United Airlines didn’t hire me because they found I had a heart murmur during my medical. They told me I’d never make it to pilot mandatory retirement at age 65. I decided I’d show them, and at age 32, my fitness journey began! Marathons (23 to date), bike riding, Century and Double Century rides – anything and everything I could find to compete in, I entered!

I reached mandatory pilot retirement age at American Airlines almost four years ago, and I am still going like a beast! After retirement, I thought about winding down, but with my son Brandon’s encouragement, I got into these Sprint Triathlons with him, and now I’m training for my first 70.3 in Victoria in May! I’m having so much fun, and most of my training is with my son. What a lucky guy I am!

I told a guy at the pool last week that I wanted to do a Half Ironman before I was too old, and he looked at me and asked me, “how old is too old?” So, here we go again! What a great ride, and I’ve saved the best for now with my son!

The father and son have struggled with health challenges that could have stopped them in their tracks, but they persisted.

They’ve both gone from life-altering diagnoses to being finish-line frequenters. They compete in 8-10 events per year, including Spring Classic, most of WHY’s triathlon series (PDX, Hagg Lake, Lucky, and Columbia River), and multiple trail runs with our brother company Bivouac Racing.

Robert and Brandon, the two of you are an inspiration to the WHY family! Keep going strong and having fun! Thank you so much for sharing your incredible story.