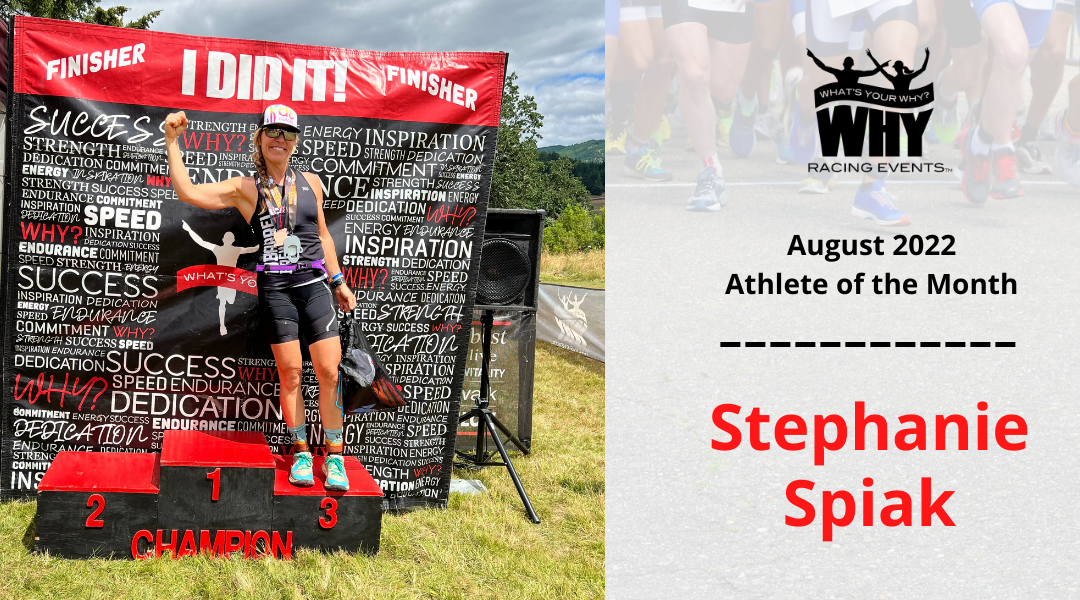 We are pleased to introduce you to August’s athlete of the month, Stephanie Spiak!

Stephanie is an avid triathlete and cyclocross racer with a recent health scare and an inspiring story to share.

In March of this year (2022), she was diagnosed with rectal cancer. This diagnosis came after noticing blood in her stool in December 2021 and getting it checked out. This early detection turned out to be essential. In April, she started six weeks of daily radiation and two five-day cycles of chemotherapy, which continued through most of May.

No one has time for cancer, and certainly not a busy mother of four who was planning on competing at Triathlon Nationals in August 2022, racing in the spot deferred from 2020.

The thought crossed her mind of bagging the race, but she decided to press forward, declaring,

“I’m not a quitter. I’m stronger than cancer.”

Stephanie dug into the support from her community and found the strength to continue light training throughout her treatment, though far from the level she had planned, as a competitive athlete.

She says, “I just decided to keep doing things, to keep showing up. I’ve been to several races. I’m often the last one in, but that is OK. Just thankful to be able to be there.”

We caught up with Stephanie at Hagg Lake Triathlon & Trail Festival, where she completed the Olympic distance triathlon on Saturday and the off-road sprint distance tri on Sunday. As we marveled at her beastlike attitude and performance so soon after finishing cancer treatment, she explained that it was a practice run for Tri Nationals, where she will also be doing back-to-back Olympic and sprint distances.

August is a big month for Stephanie, as she competes at that race, turns 50 and finds out if she is cancer free. We couldn’t be more pleased to add “athlete of the month” to the list of accolades!

Stepanie’s advice to others who find themselves in similar situations:

“Be ready for waves of emotions. Never give up. Focus on the positive. Rely on your community. Take things a day at a time. The power of a positive mind and community does wonders. Don’t be afraid to reach out when you need help.”

She continues, “A lot of times I wanted to quit over the last few months. My kids inspired me to keep going.”

In addition to the struggles that come from healing after intense treatment, there is also the adjustment that comes from not being able to compete at the level she used to. At least not right away.

She quickly acknowledges that she needs to give her body grace to heal and perform at whatever level it can.

She concludes with this nugget of wisdom:

“Pay attention to your body. Don’t be afraid to call your doctor. They are out there for you. Ask lots of questions.

Live life, have fun, believe in yourself and never give up. You never know; you could be inspiring someone out there.”