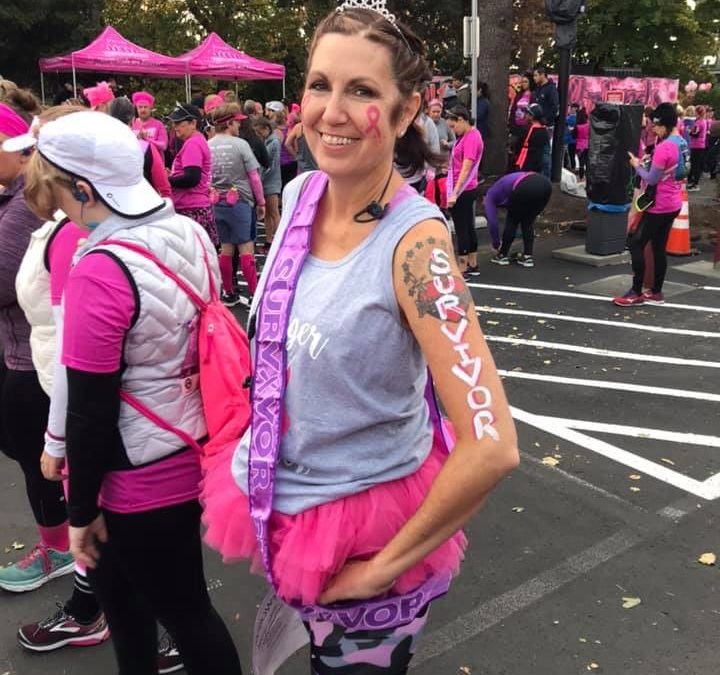 Karen’s story is one of survival, resilience and support from girlfriends – the kind of things we hold dear!

Karen had been a runner for quite some time when she was diagnosed with breast cancer in 2009. In fact, she had just finished a marathon!

Her running buddy Jessica Gorder was with her when she initially noticed the lump on her breast. Fittingly, they were on a run at the time.

2010 saw a year full of treatment, but not before running as much as she could between the diagnosis and when chemo was in full swing.

Karen notes that she was bummed that she had to miss running Hood to Coast that summer due to treatment and recovery, but she still went along with the crew, which included Jessica, to hang out at the beach house.

When asked what encouragement she would give to women who find themselves in similar situations, she said, “When you are going through it, you feel like it is never going to end. But it does.”

“There is so much support out there for people who are experiencing breast cancer treatment. Keep the faith. Lean into the support systems out there, and the support from family, friends and co-workers. It will get better, you will get through it.”

Fast forward to the next year, much to the delight and amazement of her running buddies, she was back out running the Hood to Coast with her team.

Karen says, “It was really nice to be back running with my friends. It was way more fun to run with other people.”

In the years since, she has continued to blaze trails and keep running. When we talked to her, she was getting ready to chase a PR at Santa’s Posse – in the cold and snow!

Karen, thank you for sharing your inspiring story! We are glad to have you as part of the WHY Racing family!